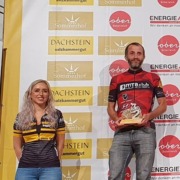 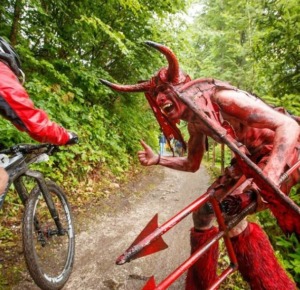 Hüseyin:
Salzkammergut B is one of my favorite races because it offers something for every type of rider. ST has long fast sections, gravel, rocky trails and plenty of climbing making it everyone’s game. And it is not too long that you forget your phone pin by the end. It does not get very cold or muddy in bad weather. And it is a big, well organized party with thousands of participants. It even has its own devil. Normally ST would be my 10th race day but this year I am behind schedule and will be peaking in August. So no top end power but a solid base (hitting 300hrs before May) and lots of sub-threshold training. With experience of 5 earlier STs under my belt I made some changes to not to please blow up in the last 90-120 minutes. Plan is consuming jels of my own production and taking only water from feed stations. This plan requires cow farm levels of water consumption so a tight schedule. Weather also plays a role, in 2019 I was shivering and having problems at even changing gears. Drinking ice cold water was impossible so I ran out of fuel and slowed massively. By 90 mins it was all going according to plan and I reached the long flat section alone at 7. position having consumed all my starting water. First feed zone did not offer any water bidons so I had to pick up the “iso” from the last helper standing. It is critical to find fast riders here and they can be 30 secs front or behind so stopping was not an option. Unfortunately I did not find anyone so had to ride this 50 min section alone. Not one soul in sight.

With heavy rain it was a surreal experience.

Second feed zone also did not offer water bidons, only iso. Again I did not stop because this was a fast section. Clearly a mistake when I was already riding alone. After getting over the steep Hallstatt climb I was behind my best time by 6 mins and my water plan by 1 liters! So I stop at the next feed zone and try to get water in my empty bidon.
(In local lang)
-Water please
-Iso?
-No. Just water.
Helper offers water in a paper cup.
-thanks. But I need water in my bidon (pointing with my finger into my bidon)
Finally a helper takes my bidon and fills it from the hose. Mission accomplished. I pass Omi’s water point without stopping but it is nice to see it there.

Up Rasberg I stop at the feed zone again and get my water filled. At this point Wolfgang Mayer catches up to me. He is a strong rider and always has my number is this race so we have a race to ourselves. We ride close by to the foot of last climb and from his body language I can see that he is gonna pop soon. Been there, done that. In my previous 5 editions I hit the wall on this climb at levels from bad to absolute worst. He soon gets dropped and I also slow down but still work well enough to post my best time here. Tired but with plenty of energy I push for the last 50mins to the finish.

At the last feed zone isoism continues. No water bidons so I stop and cause some stirr here too. After getting my hard earned water I push as much as possible not to get caught and maybe catch someone. Again no one in sight but it turns out both in front of and behind me there were riders within 2 minutes.

I hit the last muddy trails which are put there to make you look business at the finish line.

Otherwise we were spray washed in asfalt sections and would arrive -god forbid- sparkling clean.

Anyway I finished 7. and get to the podium in m40. More importantly food was the last thing on my mind despite watering mishaps.

Podium ceremonies at ST have frequent no shows, probably due to being late (21:30 for B and A).

Mine was no different and I was alone there too, in perfect sync with the day’s thema.

Overall a memorable day. Next one is Ischgl. 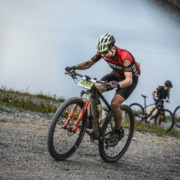 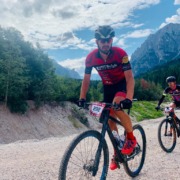 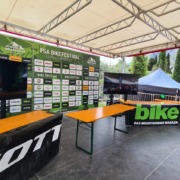 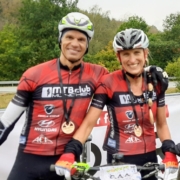 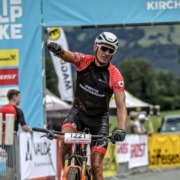 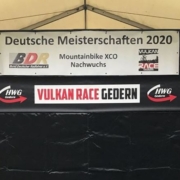